means the replacement cost less depreciation of a particular cargo.

means the Shipper must contact the Carrier or Carriers’ local representative, prior to tender departure of the shipment.

means a landing area used regularly by aircraft for receiving or discharging cargo and premises adjacent thereto, which is designated by the Carrier for acceptance, delivery and customs clearance of shipments.

means the document made out by or on behalf of the Shipper which evidences the contract between the Shipper and Carrier for carriage of cargo over routes of the Carrier.

BILL OF LADING (B/L)
means the written transportation contract between the Shipper and the Carrier (or their agents). It identifies the freight, who is to receive it, and place of delivery; and gives the terms of the agreement.

which is equivalent to transportation means carriage of a shipment by air.
See also, CARRIER.

Domestic Carriage
means, (except as otherwise specified) carriage in which according to the contract of carriage, the place of departure, the place of destination and the entire transportation are within one Country.

includes the air Carrier issuing the Air Waybill and all Carriers that carry or undertake to carry the cargo under such Air Waybill or  perform any other services related to such air carriage.

means the charges entered on the Air Waybill for collection from the consignee.

means the party whose name appears on the Air Waybill as the party to whom the shipment is to be delivered by the Carrier.

means the same as SHIPMENT

means the District of Columbia and all contiguous States of America.

means, unless the context requires otherwise, the Convention for the Unification of Certain Rules relating to International Carriage by Air, signed at Warsaw, October 12, 1929, or that Convention as amended by the Hague Protocol, 1955, Montreal Protocol No.4, Montreal Convention, whichever may be applicable to carriage hereunder.

which is equivalent to the term Customs Clearance Agent, means a Customs Broker or other agent of the consignee designated to perform clearance services for the consignee.

means full calendar days, including Sundays and legal holidays; provided that, for purposes of notification, the balance of the day upon which the Air Waybill is issued or flight commenced shall not be counted.

means the surface carriage of inbound consignments from the airport of destination to the address of the consignee or that of their designated agent, or to the custody of the appropriate government agency when required.

means detention of an airplane,  truck, or ULD (unit load device) due to a delay beyond the time allowed to load or unload its cargo; and the charge for such a delay.
See UNIT LOAD DEVICE. (link to Unit Load Device in this document)

means a rate(s) applying between two points within one country.

refers to Amerijet’s General Cargo Express product. It guarantees movement on the next available flight, GCX shipments move at the highest priority.

means any consignment except a consignment containing articles of extraordinary value, or valuable cargo as defined herein.

See definition for CARGO. (link to Cargo in this document)

means promise of reimbursement in the case of loss; paid to people or companies so concerned about hazards that they have made prepayments to an insurance company.

means if the Shipper or consignee insures the cargo, the insurer who indemnifies him under the terms of the insurance coverage may, as a matter of law, be entitled to seek recovery of the amount paid to this insured form the party who is liable for the loss to the cargo. This is referred to as a subrogated claim.

means the carriage over the routes of two or more Carriers.

means the Carrier who issues an Air Waybill or Bill of Lading.

means freight moving from origin to destination via two or more Carriers.

means less than an entire cargo container devoted to one Shipper’s cargo.

shall mean all mammals/primates (other than humans), domesticated or wild, not restricted for import/export by any government regulation or law.

means a rate that applies to transportation over the lines or routes of one Carrier only.

The minimum amount which applies for the transportation of air cargo service, no matter how small the shipment.

means those shipments that are subject to possible decay and/or due to change in the climate, temperature, altitude or other ordinary exposure, or because of length of time in transit, or inherent vice while in Carrier’s possession, for more information please refer Rule 110 (link to Rule 110)

mean personal effects consisting of wearing apparel, cosmetics, and toilet articles worn or used by an individual, not for resale.

means local movement of freight between the Shipper’s pickup point and the originating terminal, or between the destination terminal and the consignee.

means the space a unit load device occupies on a cargo aircraft.

means a platform or skid on which cargo sits, facilitating its movement with a forklift.
See UNIT LOAD DEVICE (ULD). Link to Unit Load Devise in this document)

refers to the value of a national currency equivalent to the regime’s Special Drawing Rights per kilogram.

except as otherwise provided herein, means one or more packages, pieces or bundles accepted by the Carrier from one Shipper at one time and at one address, receipted for in one lot and moving on one Air Waybill to one consignee at one address.

which is equivalent to Consignor, means the person whose name appears on the Air Waybill as the party contracting with Carrier for the carriage of the shipment.”UNITED STATES OF AMERICA” or”THE UNITED STATES” or”THE U.S.A.” or”U.S.”  or“US”each means the area comprising the 49 contiguous federated states; The Federal District of Columbia; Alaska; the Hawaiian Islands; Puerto Rico; the Virgin Islands; American Samoa; Canton, Guam, Midway and Wake Islands.

means Amerijet’s expedited service for shipments of up to 60 pounds, with the highest boarding priority, the fastest transit time, and special attention throughout their journey.

means Amerijet’s standard service for shipments of up to 60 pounds.

means the document issued when a Carrier transfers interline cargo, and endorsed by the Carrier receiving the cargo.

means an Amerijet service providing personal U.S. post-office box mailing addresses to international customers to give to vendors who require a U.S. mailing address. This service enables customers anywhere in the world to receive shipments from their favorite U.S. catalogs and websites

means any shipment which contains one or more of the following: 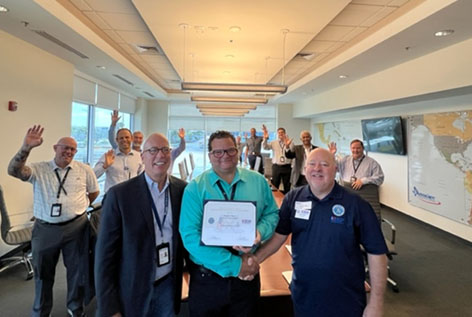 Miami, FL, May 2, 2022- Amerijet International Airlines and Vice President of Flight Operations, Matthew Macri received the US Department of Defense Employer Support of the Guard and Reserve (ESGR) Patriot Award. The award is in recognition of their support of Chief Warrant Officer 3 Jack Vaughn’s multiple United States Army Reserve deployments.  The Patriot […] 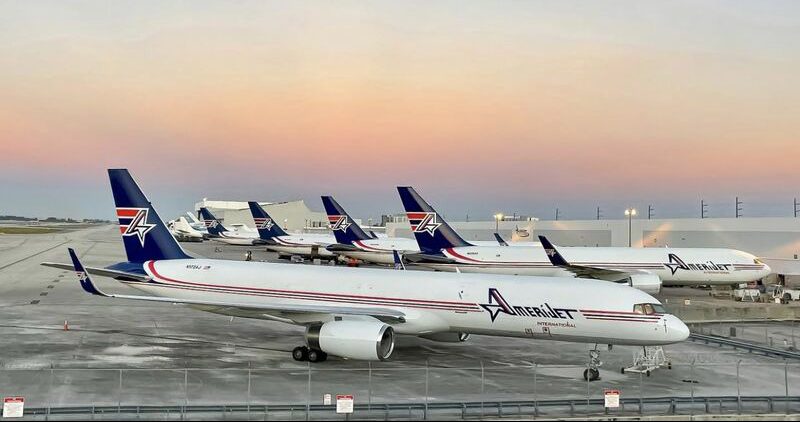 Miami, FL – Amerijet International Airlines announced that it has introduced six B757 freighters to its fleet. The addition comes as part of a comprehensive expansion and modernization strategy launched by the company in 2020. The B757-200(PCF) freighters will offer Amerijet customers versatility, range, and payload capability ideally suited for destinations throughout its Caribbean, Mexico, […] 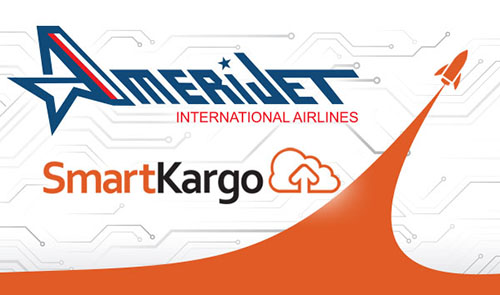 Miami, FL, February 28, 2022 – Amerijet International Airlines has announced the launch of its new cargo management system, SmartKargo.   The new online system enables the airline’s customers greater flexibility to view prices, capacity and make real-time bookings. Digital transformation and automation have been in the forefront of Amerijet’s vision to provide its customers […]